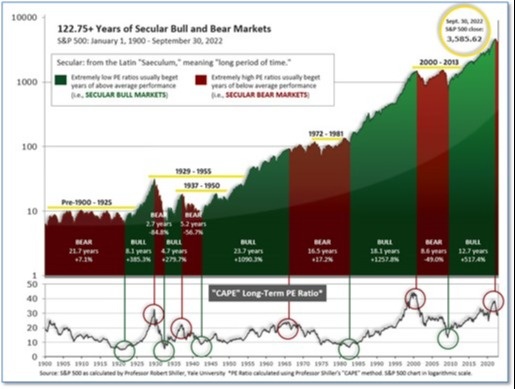 U.S. stocks regained upward momentum as investors reacted to better-than-expected earnings reports from some prominent companies and hints that the Federal Reserve may moderate its pace of interest rate hikes.  The benchmark S&P 500 index enjoyed its best gain in nearly four months, while the Dow Jones Industrial Average marked its third consecutive week of gains rallying over 1448 points to close at 31,083—a gain of 4.9%.  The technology-heavy NASDAQ Composite rose 5.2%, while the S&P 500 added 4.7%.  The mid cap S&P 400 and small cap Russell 2000 rose 3.0% and 3.6%, respectively.

Precious metals finished the week in the green.  Gold rose 0.5% to $1656.30 per ounce, while Silver rallied 5.5%.  West Texas Intermediate crude oil ticked down -0.7% to $85.05 per barrel.  The industrial metal copper, viewed by some analysts as a barometer of world economic health due to its wide variety of uses, gained 1.5%.

The number of Americans filing for first-time unemployment benefits fell last week, even as the broader economy is showing definitive signs of slowing.  The Labor Department reported initial jobless claims fell by 12,000 to 214,000 in the seven days ended October 15.  Economists had expected new claims to total 230,000.  Analysts view the number of people applying for jobless benefits as one of the best barometers of whether the economy is getting better or worse.  New filings have been slowly creeping higher over the past month, but remain at very low levels signaling the labor market remains tight.  Meanwhile, ‘continuing claims’, which counts the number of people already receiving benefits, rose by 21,000 to 1.39 million—still near a 50-year low.  However, most analysts aren’t expecting claims to remain so low much longer.  Chief economist Rubeela Farooqi of High Frequency Economics wrote in a note, “We expect layoffs to rise gradually over coming months as demand slows in response to aggressive Fed tightening.”

The sentiment of the nation’s homebuilders fell for a record tenth month in a row this month, a situation that is both “unhealthy and unsustainable”, according to the National Association of Home Builders (NAHB) chairman Jerry Konter.  The NAHB reported its monthly sentiment index fell 8 points to just 38 in its latest reading.  Outside of the pandemic, the latest reading is its lowest since August of 2012.  For perspective, the index at this time last year was at 80.  All three gauges that make up the headline number fell.  Current sales conditions fell by 9 points, while sales expectations for the next six months fell by 11 points.  The measure of prospective buyers fell by 6 points.  All four regions of the country posted a drop in builder confidence, led by the South and West.  Mortgage rates have doubled from last year, now exceeding 7%, which has considerably cooled buyer demand.

Sales of existing homes fell again, as the downturn in housing continues to gather steam.  The National Association of Realtors (NAR) reported existing-home sales fell 1.5% to a seasonally-adjusted annual rate of 4.71 million in September.  It was its eighth consecutive monthly decline, the first time that’s happened since 2007.  The decline was in line with economists’ forecasts.  Outside of the pandemic, the level of sales activity was at its lowest since September 2012.  Compared with the same time last year, home sales were down 23.8%.  As expected, prices continued to come down as well.  The median price for an existing home fell to $384,800 from $389,500 in August.  Expressed in terms of a months-supply metric, there is currently a 3.2-month supply of homes on the market.  Before the pandemic, a five to six-month supply was generally considered a ‘balanced’ housing market.

Factory activity in the New York region pulled back this month—the third consecutive negative reading.  The New York Federal Reserve reported its ‘Empire State Business Conditions index’, a gauge of manufacturing activity, fell 7.6 points to -9.1 in October.  Economists had expected a decline to just -5.0.  In the details of the report, the index for new orders remained unchanged at 3.7, while the shipments index plunged 19.9 points to -24.1.  On the inflation front, the prices-paid index rose 9 points to 48.6.  Richard Moody, chief economist at Regions Financial stated the U.S. factory sector is under pressure from falling orders, thinning backlogs, and right-sizing of inventories.  Firms reported they are not expecting conditions to improve over the next three months.

Similarly, the Philadelphia Fed reported its manufacturing gauge remained weak as well recording its fourth negative reading in five months.  The Philadelphia Fed reported its gauge of regional business activity ticked up to -8.7 from -9.9 in the prior month.  The reading was far below economists’ expectations for a reading of just -0.5.  New orders rose just 2 points to -15.9, while shipments remained unchanged at 8.6—its lowest reading since May 2002.  The measure on the business outlook for the next six months fell sharply to -14.9 from -3.9.

The Federal Reserve’s ‘Beige Book’—a collection of anecdotal reports from each of its member banks, showed that inflation eased a bit in early fall, but higher interest rates and a slowing economy spurred more talk of recession.  Some key points from the report--“Price growth remained elevated, though some easing was noted across several districts,” the Beige Book said.  In addition, the declining cost of fuel, commodities and freight costs also raised expectations among businesses “for price increases to generally moderate.”  Yet other businesses said high inflation was still pushing up wages and would continue to do so.  Worries about recession have increased, especially in the Boston, Chicago and Philadelphia regions.  “The outlook turned more pessimistic as recession fears spread,” the Boston Fed said.

Former Bank of Canada governor Mark Carney said Canada would likely head into a recession next year but will fare better than many other countries and recover faster because of its strong economic fundamentals.  Carney made the comments before the Senate committee on banking, commerce, and the economy.  "I think a recession is both likely globally and most probable in Canada," Carney said.  Carney told senators that China is "effectively in recession" now.  Europe, he said, is entering a recession and the U.K. is already in one--and while the United States' economic momentum is propping up Canada, it will be in recession "at some point" next year.  Carney cited a strong labor market and low unemployment as reasons why Canada will do better than other countries in weathering the coming recession.

After just 45 days in office, Liz Truss became the third Conservative prime minister to be toppled in as many years, and she will go down as the shortest-serving leader in British history.  “I cannot deliver the mandate on which I was elected by the Conservative Party,” Truss said.  Truss said she will remain in office until a replacement is chosen, which the Conservative Party said it would do by the end of next week.  Analysts say Truss’ economic plan included many tax cuts that Britain simply couldn’t afford—pummeling the value of the UK’s currency and driving up costs for people and businesses.

On Europe’s mainland, France's foreign minister voiced alarm over a massive US climate spending package, saying it risked unfair competition, but said Europe did not want a green trade war.  Foreign Minister Catherine Colonna said parts of U.S. President Joe Biden's Inflation Reduction Act will “impact the level playing field between the US and European actors.”  The Inflation Reduction Act is set to pump over $370 billion into green energy.  Her remarks echoed similar comments from French and German economic ministers who called for a strong response from the European Union against state support for U.S. green companies.  When asked if the tensions could fuel another trade rift similar to the earlier Boeing vs. Airbus showdown, she answered “We are certainly not looking for any war.”

The Germany government slashed its growth forecast for this year and now predicts the economy will shrink in 2023.  In the first three months of 2022, economic output increased by 0.2%.  However, Economy Minister Robert Habeck said that GDP is believed to have shrunk in the third quarter and is expected to do so again in the current fourth quarter--and again in the first quarter of 2023.  The economy ministry expects Germany's gross domestic product to grow by 1.4% this year and then decline by 0.4% next year.  That's a far cry from its estimates in late April when it had forecast 2.2% growth in 2022 and 2.5% next year.  Inflation, rising energy prices and supply bottlenecks have all added up to a perfect storm for the German economy.

In Asia, a delay in the reporting of China’s GDP data has fueled concerns over the health of the world’s second-largest economy.  A day before GDP data was to be published, Zhao Chenxin, a senior official at the National Development and Reform Commission (NDRC) stated, “The economy rebounded significantly in the third quarter.”  The country’s performance, he added, was “outstanding”.  However, hours later, the government’s statistics department quietly updated its website to clarify that the data would be delayed, without providing further explanation or comment.  Economists had forecast growth of just 3.3%--far below the country’s long-term average and its 5.5% target for the year.  Robin Xing, chief China economist at Morgan Stanley stated, “Slightly above 3% sub-par growth is probably the best they can get with strict Covid management and the drag from the housing sector.”

Japan is considering spending just over 20 trillion yen ($133 billion USD) on a new economic package aimed at helping households cope with accelerating inflation and improving tourism.  Prime Minister Fumio Kishida is expected to make a formal decision next week so an extra budget to fund the package can be submitted to parliament, sources say.  The total size of the package will likely be larger, given that spending by others, such as local governments, will be included.  A nagging issue is how the government will secure funds when the country's debt is more than twice the size of the economy.  Kishida, who has stressed the need for a "bold" package, is focusing on three areas--steps to cope with inflation and the effect of a weaker yen, spurring wage growth, and rejuvenating growth through investment and reform.

Social media and “tech” companies who rely on advertising dollars to be profitable have been under considerable pressure lately—to put it mildly.  SNAP was the first major advertising-dependent social media company to report earnings this week, and it was a bloodbath.  SNAP shares plunged 26% following its report to its lowest price since 2019—just $7.88.  Even the biggest of all social media companies - Facebook - has been caught up in the carnage.  Now calling itself by the widely-mocked name “Meta”, Facebook is down 67% from its high of 13 months ago, which takes it all the way back to where it was in 2016.  As one pundit put it, “Zuck sure has meta mess of Facebook!”  (Chart by wolfstreet.com) 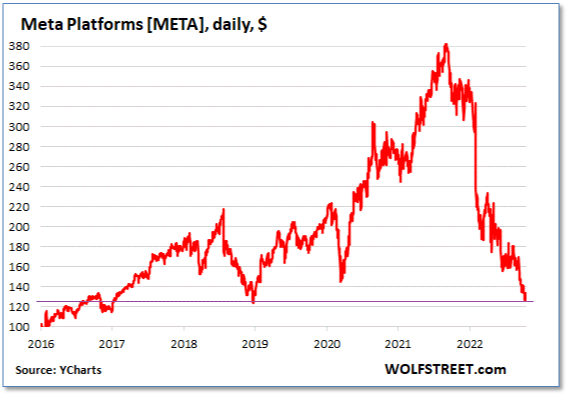