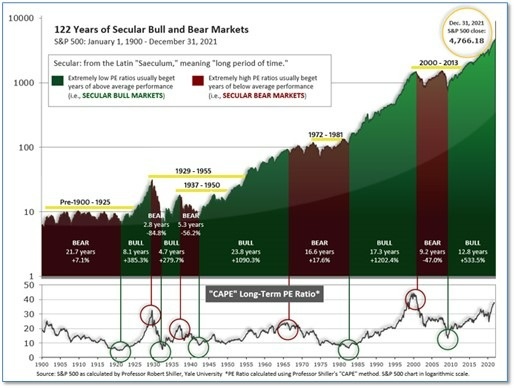 U.S. Economic News:  The number of Americans seeking first-time unemployment benefits fell to their lowest level since 1969 last week, a sign of the stubbornly tight labor market.  The Labor Department reported initial jobless claims fell by 28,000 to 187,000 last week.  Economists had expected claims to total 210,000.  Ian Shepherdson, chief economist at Pantheon Macroeconomics, noted the drop in claims completes the reversal of the spike triggered by the Omicron-variant of the coronavirus.  Meanwhile, continuing claims, which counts the number of Americans already receiving benefits, fell by 67,000 to 1.35 million.  That number is also at its lowest level since the 1970’s.

The number of home transactions in which a contract has been signed but not yet closed declined for the fourth consecutive month the National Association of Realtors (NAR) reported.  Analysts look at the data to get an early-read on the health of the real estate market.  The NAR’s ‘pending home sales’ index slid 4.1% in February.  With February’s decline, the index has fallen to its lowest reading in nearly two years.  Compared to the same time last year, pending home sales were down 5.4%.  On a regional basis, sales were down in every region except the Northeast.  The largest decline occurred in the Midwest, where contract-signing activity declined 6%.  Lawrence Yun, chief economist for the NAR, attributed the index’s decrease in February to the low supply of homes listed for sale.  “Buyer demand is still intense, but it’s as simple as ‘one cannot buy what is not for sale,'” he said.

The number of new homes sold last month declined despite inventory hitting its highest level since 2008.  The government reported new home sales decreased 2% to an annual rate of 772,000 in February.  Analysts had expected sales to pull back to an annualized rate of 805,000.  Compared to the same time last year, sales were down 6%.  Based on the current sales rate, there is now a 6.3-month supply of homes on the market.  Six months is generally considered a “balanced” housing market.  On a regional basis, new home sales varied significantly.  The Northeast recorded a 59% uptick in sales, while in the West sales declined by 13%.  The average sales price for a new home sold in February was $511,000, while the median price was $400,600.  Given the current high prices for the average new home, the near-term outlook for housing isn’t exactly bright.  Danielle Hale, chief economist at Realtor.com, commented, “With the median sales price of new homes up, and only roughly 1 in 10 new homes sold for less than $300,000 compared with 3 in 10 new homes in this price range last year, a new home is not an option for many first-time homebuyers even before the impact of higher mortgage rates is considered.”

The U.S. economy grew in early March according to a pair of preliminary surveys from Standard and Poor’s.  S&P’s flash services ‘Purchasing Managers’ Index’ (PMI) rose 2.4 points to an eight-month high of 58.9 this month, while the flash manufacturing PMI climbed to a six-month high of 58.5 from 57.3.  Numbers above 50 signify growth, while readings above 55 are seen as exceptional.  The flash readings signal an uptick in the U.S. economy in March after a slow start early in the year.  Executives said supply-chain bottlenecks that have contributed to high U.S. inflation grew less severe in March.  Businesses were also able to hire more people and boost production.  What remains to be seen is how much the economy is affected by the war in Ukraine or by a major coronavirus outbreak in China.

Orders for goods expected to last at least three years, so-called ‘durable goods’, sank last month and business investment fell for the first time in a year.  The government reported U.S. durable goods orders sank 2.2% in February, the first decline in five months.  Economists had expected just a 1% decline.  While orders were soft in every major category, the declines were steepest in aircraft and autos.  Bookings for new commercial airplanes tumbled 30% in February and accounted for most of the decline in the headline number.  Automobile makers also reported a 0.5% decrease in new orders.  The measure that strips out the often-volatile transportation categories, slipped a much lesser 0.3%, but it was still the first decline in ‘core durable goods’ in a year.  Stephen Stanley, chief economist at Amherst Pierpont Securities nonetheless remained optimistic.  “Looking past the month-to-month noise, we continue to see steady, solid growth,” he wrote.

The largest proportion of Americans since the 1940’s feels their financial health will get worse in the coming year, the University of Michigan reported.  The final reading of U of M’s U.S. Consumer Sentiment index fell to 59.4 and hovered near an 11-year low because of high inflation and worries over Russia’s invasion of Ukraine.  Furthermore, the greatest share of Americans in eighty years said they expect their financial situation to get worse in the year ahead.  The index hit a pandemic peak of 97.2 in April 2021 before beginning a long slide that coincided with the surge in inflation.  The cost of living has jumped over 8% in the past year, outstripping the increase in most workers’ pay.  Richard Curtin, chief economist of the survey stated, “Inflation has been the primary cause of rising pessimism, with an expected year-ahead inflation rate at 5.4%, the highest since November 1981.” Most economists think that 5.4% is lower than inflation is likely to be in the coming year, and that even greater pessimism may result.

International Economic News:  Canada is welcoming a major investment from LG Energy Solutions, one of the leading battery manufacturing companies in the world.  The battery maker is teaming up with automaker Stellantis N.V. to create a C$5 billion joint venture in Canada to manufacture batteries for electric vehicles in Canada.  The battery facility will be located in Windsor, Ontario, and will supply Stellantis plants in Windsor and across North America.  The facility will be operational by 2025.  The Government of Canada has been working closely with both companies to secure this investment given that the project aligns with the government's commitment to develop an ecosystem that supports clean technology and industrial transformation.  The project is expected to create 2,500 well-paying jobs.

Across the Atlantic, inflation in the United Kingdom hit an annualized 6.2% last month—its highest level since 1992.  Soaring food, fuel, and energy costs continued to deepen the country’s cost-of-living crisis.  February’s CPI was above consensus expectations for a 5.9% annual figure.  The Bank of England has hiked interest rates at three consecutive monetary policy meetings, raising the costs of borrowing from its historic low of 0.10% to 0.75%, as it looks to control runaway inflation without weighing on economic growth.  The Monetary Policy Committee delivered a more dovish tone than expected by the market last week, highlighting the squeeze on household incomes amid the sharp rise in commodity prices.  Policymakers now expect inflation to peak at 8% in the second quarter of 2022.

On Europe’s mainland, Germany unveiled plans to halve its imports of Russian oil by summer as Western nations continue to cut off economic ties with Moscow as punishment for invading Ukraine.  Before the war began, a third of Germany’s oil imports, nearly half of its coal imports, and over half of its gas imports came from Russia.  Economy Minister Robert Habeck told reporters in Berlin, “In the past few weeks, we have undertaken intensive efforts with all the relevant actors to import fewer fossil fuels from Russia and broaden the basis of our supply.”  On top of the reduction in oil imports, Germany hopes to wean itself off Russian coal completely by the summer or autumn of this year.  However, gas imports will be a bit more complicated Habeck stated.  It’s expected to take until mid-2024 before Germany can free itself of Russian natural gas.

European Union leaders had one message for Beijing—stop supporting Russian President Vladimir Putin.  Chinese authorities have so far refused to fully condemn Russia’s unprovoked invasion of its neighbor and have supported Moscow’s complaints about NATO expansion.  Italy’s Prime Minister Mario Draghi said, “China is [the] most important country, they can be crucial in the peace process, they have lots of leverage, a lot of leverage, and so we are all waiting.”  Finland’s Prime Minister Sanna Marin also called China a “major player” and said the European Union had to make sure “China is on the right side of history with this war.”

Japan’s government said in its monthly report that nation needs to closely watch for downside economic risks from rapid commodity inflation.  "As uncertainties around the situation in Ukraine loom, downside risks such as rising raw material prices, fluctuations in financial markets and supply constraints require full attention," the government said.  The report kept its main assessment of the economy unchanged from last month, saying its recovery was in progress although some vulnerabilities remained.  Japan's core inflation hit a two-year-high of 0.6% in February, as more companies started to pass on costs to households.  Analysts and policymakers expect core inflation to approach 2% in April.

Finally:  It wasn’t widely known to the general public before recent days, but Russia is one of the world’s largest producers of many of the commodities necessary for modern society.  Inflation was already on the rise, but since Russia’s invasion of Ukraine the price of gasoline has soared.  That’s because Russia is the second-largest crude oil exporter globally, only behind Saudi Arabia.  Man-on-the-street interviewees routinely express shock when told of this fact.  Russia also happens to be the world’s largest exporter of natural gas, with most of that going to Europe through pipelines (and Russia’s exports of natural gas are almost triple U.S. exports of natural gas).  When it comes to agriculture, Russia is a top supplier of the world’s fertilizer, its wheat is exported globally, and it is the world’s second-biggest shipper of sunflower oil.  In addition, Russia is a key supplier of industrial metals.  China, Europe, and the U.S. are the largest buyers of Russian nickel—a critical metal for electric car batteries.  The ripple effects are felt at the gas station and the grocery store as well as in unexpected ways – for example, Tesla has raised its car prices twice in just the last few weeks because of soaring nickel prices. (Chart and data from Bloomberg) 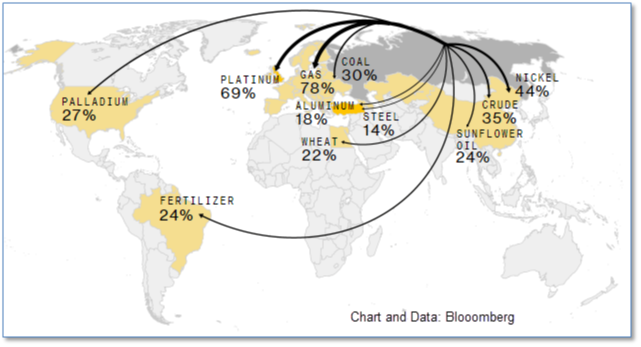