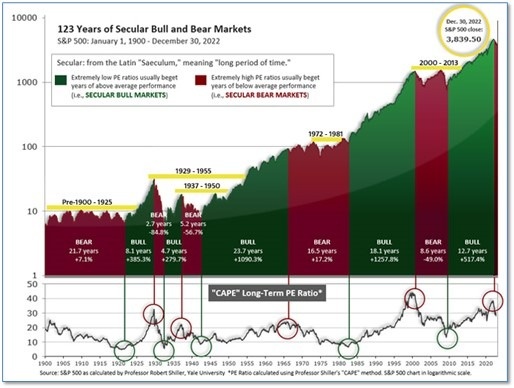 The major U.S. indexes finished the week mixed as recession fears appeared to weigh on sentiment.  The narrowly focused Dow Jones Industrial Average performed worst and gave back a portion of its strong rally in the first two weeks of the year, while the technology-heavy Nasdaq Composite recorded a modest gain.  The Dow Jones Industrial Average fell over 900 points last week to finish the week at 33,375—a decline of -2.7%.  The Nasdaq finished the week up 0.6% recording its third consecutive week of gains.  By market cap, the large cap S&P 500 ended the week down ‑0.7%, while the mid cap S&P 400 retreated -0.9% and the small cap Russell 2000 ended the week down ‑1%.

International markets finished the week mixed as well.  Canada’s TSX ended the week up 0.7%, while the United Kingdom’s FTSE 100 ended down -0.9%.  France and Germany finished the week down as well with France’s CAC 40 and Germany’s DAX each pulling back -0.4%.  In Asia, China’s Shanghai Composite rose for a fourth consecutive week, adding 2.2% and Japan’s Nikkei gained 1.7%.  As grouped by Morgan Stanley Capital International, developed markets finished up 0.7% and emerging markets added 1% (their fourth consecutive week of gains).

Precious metals finished the week mixed.  Gold managed a 0.3% rise to $1928.20 per ounce, while Silver pulled back -1.8% to $23.93.  The industrial metal copper, viewed by some analysts as a barometer of world economic health due to its wide variety of uses, finished the week up 0.8%.  West Texas Intermediate crude oil recorded a second week of gains, rising 2.2% to $81.64 per barrel.

The week brought several additional signals that the economy was slowing significantly following the Federal Reserve’s aggressive rate hikes in 2022.  Most notable may have been Wednesday’s report of a 1.1% drop in retail sales in December, which was roughly triple consensus estimates.  A drop in sales at gas stations was a major contributor, but Americans pulled back on sales of furniture, electronics, and other discretionary purchases.  Receipts fell a smaller but still steep 0.7% if auto dealers and gas stations are excluded.  November sales data were also revised lower.  Jeffrey Roach, chief economist at LPL Financial stated, “The trajectory for the U.S. economy is weakening and recession risks are rising for 2023.”

The number of Americans filing first-time unemployment claims fell to a four-month low of just 190,000 as the U.S. labor market remains resilient.  New applications fell from 205,000 in the prior week, the Labor Department reported.  The last time claims were that low was in late September.  Economists had forecast claims would total 215,000.  Forty of the 53 states and U.S. territories that report jobless claims showed a decline last week. New York posted the biggest drop, reversing a surge in the prior week.  Meanwhile, the number of people already collecting unemployment benefits rose by 17,000 to 1.65 million.  While continuing claims remain low, a gradual increase since last spring suggests it’s taking longer for people who lose their jobs to find new ones.

Sales of existing homes fell for the eleventh consecutive month in December.  The National Association of Realtors (NAR) reported existing-home sales fell 1.5% to a seasonally-adjusted annual rate of 4.02 million in December.  The nearly yearlong monthly decline is the longest streak since the NAR began tracking sales in 1999.  Economists were expecting sales to drop to 3.95 million.  The level of sales activity was lowest since November 2010, in the midst of the foreclosure crisis in America.  Compared with the same time last year, home sales were down 34%.  The median price for an existing home fell to $366,900 in December, from $370,700 in November.

In the New York region, a gauge that measures manufacturing activity dropped sharply in January signaling a deep contraction in activity.  The New York Fed reported its Empire State Business Conditions index tumbled 21.7 points to -32.9 at the start of the year—its lowest level since the worst of the pandemic in May of 2020.  Economists had expected a reading of just -7.  The new orders index, an indicator of future activity, fell 27.5 points to negative 31.1 in January.  Shipments fell 27.7 points to negative 22.4.  The indexes for prices paid and prices received moved lower as well.  Following the report, Gurleen Chadha, economist at Oxford Economics wrote in a note, “Manufacturing conditions in the U.S. are deteriorating and the worst is likely ahead.”

The “Beige Book”, a collection of anecdotal reports from each of the Federal Reserve’s member banks around the country, reported businesses expect ‘little growth in the months ahead’.  Overall, economic activity in most of the 12 Fed districts over the past six weeks showed either slight increases or slight declines of activity.  Only one regional bank--the New York Fed--reported a significant decline in activity.  The labor market was a bright spot, with all but a few districts reporting that job growth continued.  Firms still reported having difficulty filling open positions.  Many firms were hesitant to lay off employees, reporting they planned to reduce headcount through attrition if needed.  On the inflation front, selling prices increased at a moderate pace in most districts although many said the pace of increases had slowed from recent months.

Canada will enter a deeper recession than previously expected this year as the Bank of Canada's rapid interest rate hikes take hold and the U.S. economy enters a slowdown, according to a new report from Deloitte Canada.  Deloitte had previously forecast in September that Canada would enter a short-lived recession, with growth stalling in the first quarter of 2023 before returning to positive territory in the second quarter of the year.  At the time, the BoC had hiked its benchmark interest rate by 300 basis points.  It has hiked rates an additional 100 basis points since then, bringing the current overnight rate to 4.25%.  Interest payments on household debt in Canada have since soared, increasing by 16.2% on annual basis in the third quarter of the year--the largest increase on record.  "It's fair to say that 2023 is shaping to be a rocky year for the Canadian economy," Deloitte Canada's National Economic Advisory Leader Trevin Stratton said.

Across the Atlantic, consumer confidence neared a historic low in the United Kingdom.  Between inflation in the double digits and increasing energy bills, GfK reported its Consumer Confidence Index has dropped three points this month to -45.  Confidence in the economy for the coming year fell to -54 and is 22 points lower than last January.  According to Linda Ellett, UK head of retail and leisure consumer markets at KPMG, “Higher essential costs, a fear of further increases yet to come-particularly the April energy price cap rise-are weighing on consumer confidence, whilst increased spending on credit at Christmas is also weighing on many minds.”

On Europe’s mainland, nationwide strikes in France halted trains, blocked refineries, and curbed power generation, as French President Emmanuel Macron announced reforms that would raise France’s retirement age from 62 to 64 and require more years of contribution to receive a full pension.  Trade unions say more than two million protestors marched through French cities and are calling for new nationwide protests on January 31.  The government has shown no inclination of folding as Macron vowed to push ahead with his pension reform plans.  Unions say there are alternative ways of financing pensions and that the reforms are unfair to those who started working young or have physically demanding jobs.

Germany’s BDI Industry Association reported the German economy is expected to contract by 0.3% in 2023, predominantly due to the Europe’s energy crisis.  German economic output weakened in the final quarter of last year but had grown 1.9% over the whole of 2022.  BDI President Siegfried Russwurm acknowledged mild recessionary trends predominating at the start of this year, but that things should improve in the spring.  The BDI forecasts exports of goods and services increasing by 1.0% this year, with global trade rising 1.5%.  The BDI president said that Germany is falling behind other countries with lower energy prices stating, “The cost factor of energy has for long not only weakened energy intensive companies, but has also had a noticeable impact on the entire value chains of industry.”

In Asia, China recorded its first population decline in 60 years.  China’s National Bureau of Statistics (NBS) said the population fell last year to 1.4 billion.  Analysts said this was the first decline since former leader Mao Zedong’s Great Leap Forward, which caused the great famine in 1961.  President and Chief Economist at Pinpoint Asset Management, Zhiwei Zhang said, “The population will likely trend down from here in coming years.  This is very important, with implications for potential growth and domestic demand.”  The population drop came alongside the announcement of one of China’s lowest annual economic performances in half a century.  The economy expanded 3% last year, far below the government’s target.  The reading underscored the economic challenges of a shrinking labor force and a growing number of retired people.

While banks around the world have raised interest rates in response to global inflation, the Bank of Japan has steadfastly maintained its benchmark interest rate at a longstanding low of -0.1%.  Last month, Japan’s consumer inflation rate hit 4%--a 41-year high and double the Bank of Japan’s target level.  Damian Thong, who heads Japan equity research at Macquarie Group stated, “Producer prices have been rising at a much faster pace than consumer prices for some time, but now companies are passing these costs on to consumers.”  "We believe that the BOJ will [eventually] end its negative interest rate policy," he added.  Even after the jump in prices, Japan still has one of the lowest inflation rates in the world.

It may be time to add podcasts to the list of trends that peaked in 2020 and are now returning to Earth.  A multitude of media empires were created by podcasters such as Joe Rogan as audio giants like Spotify poured money into the industry.  However, data from Edison Research shows the boom may be over.  After years of growth, listener numbers fell last year after just 38% of adults surveyed said they had listened to a podcast in the last month.  Furthermore, Listen Notes, a podcast database, confirmed over 1 million new podcasts were launched in 2020.  Last year, however, that same database tracked just 217,000 new shows—an 80% drop. (Chart from chartr.co) 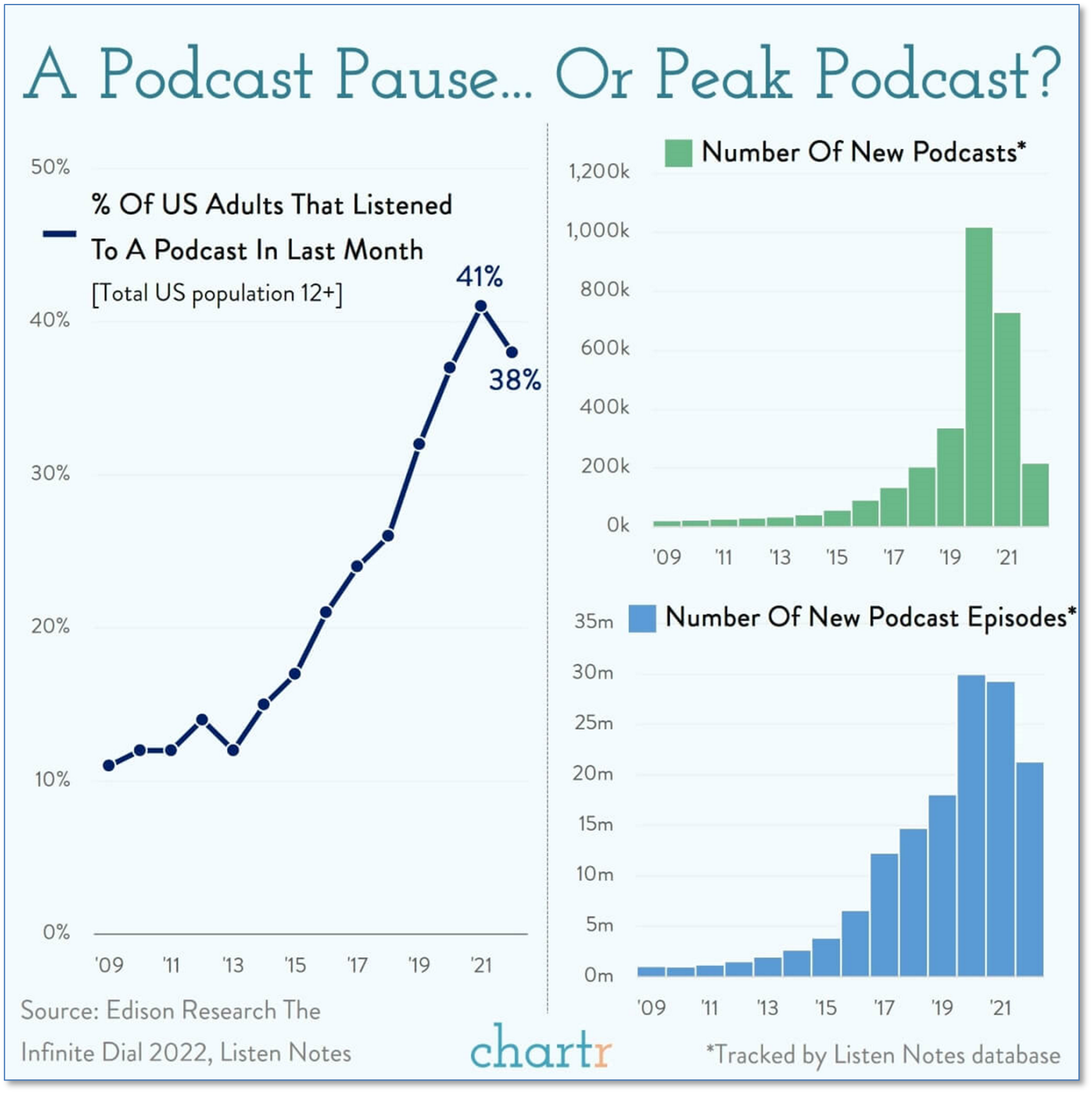